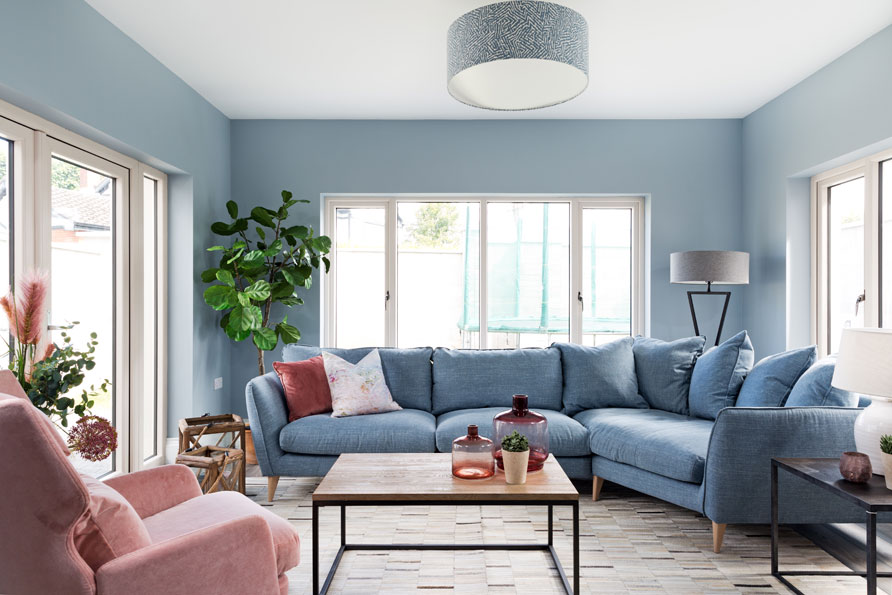 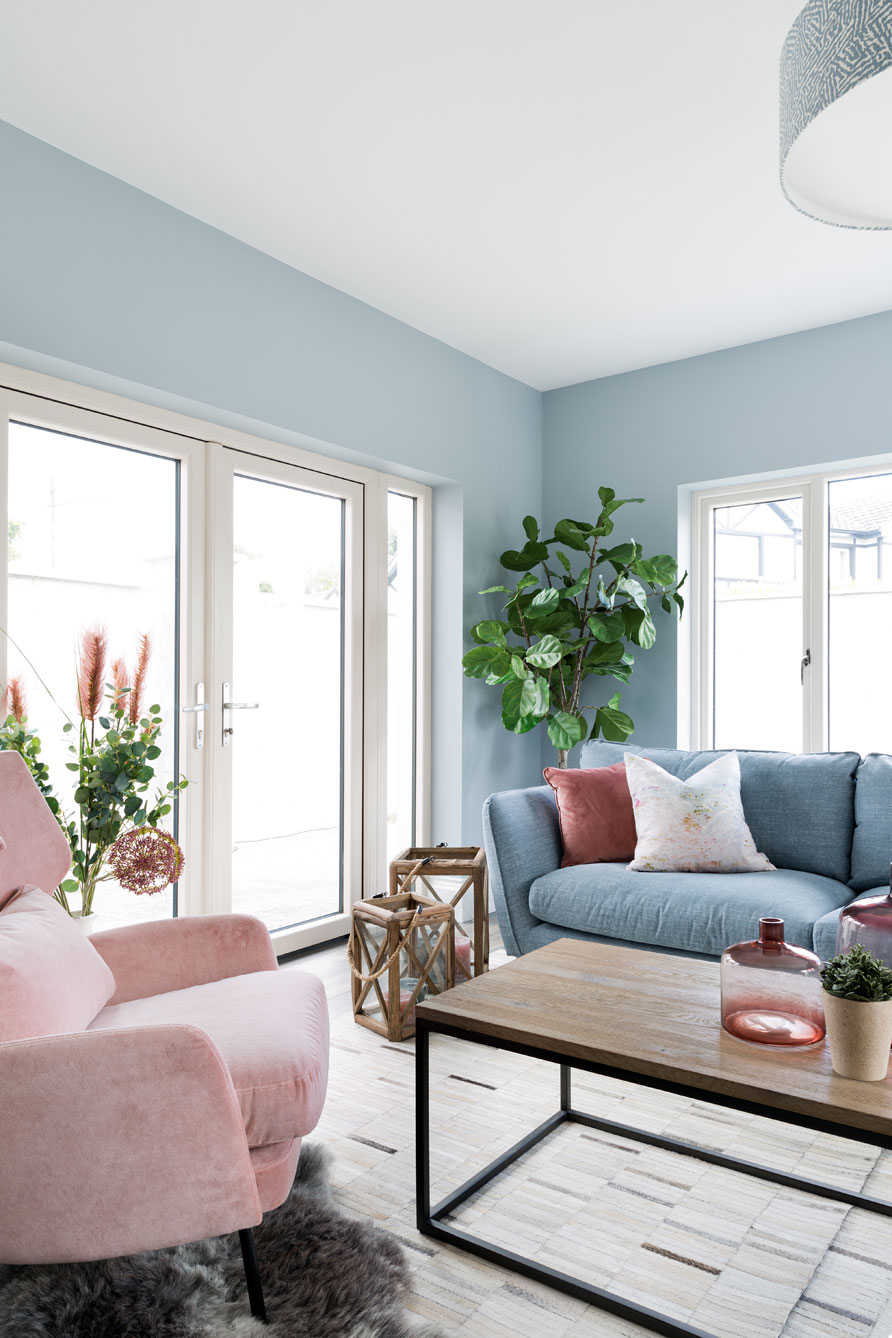 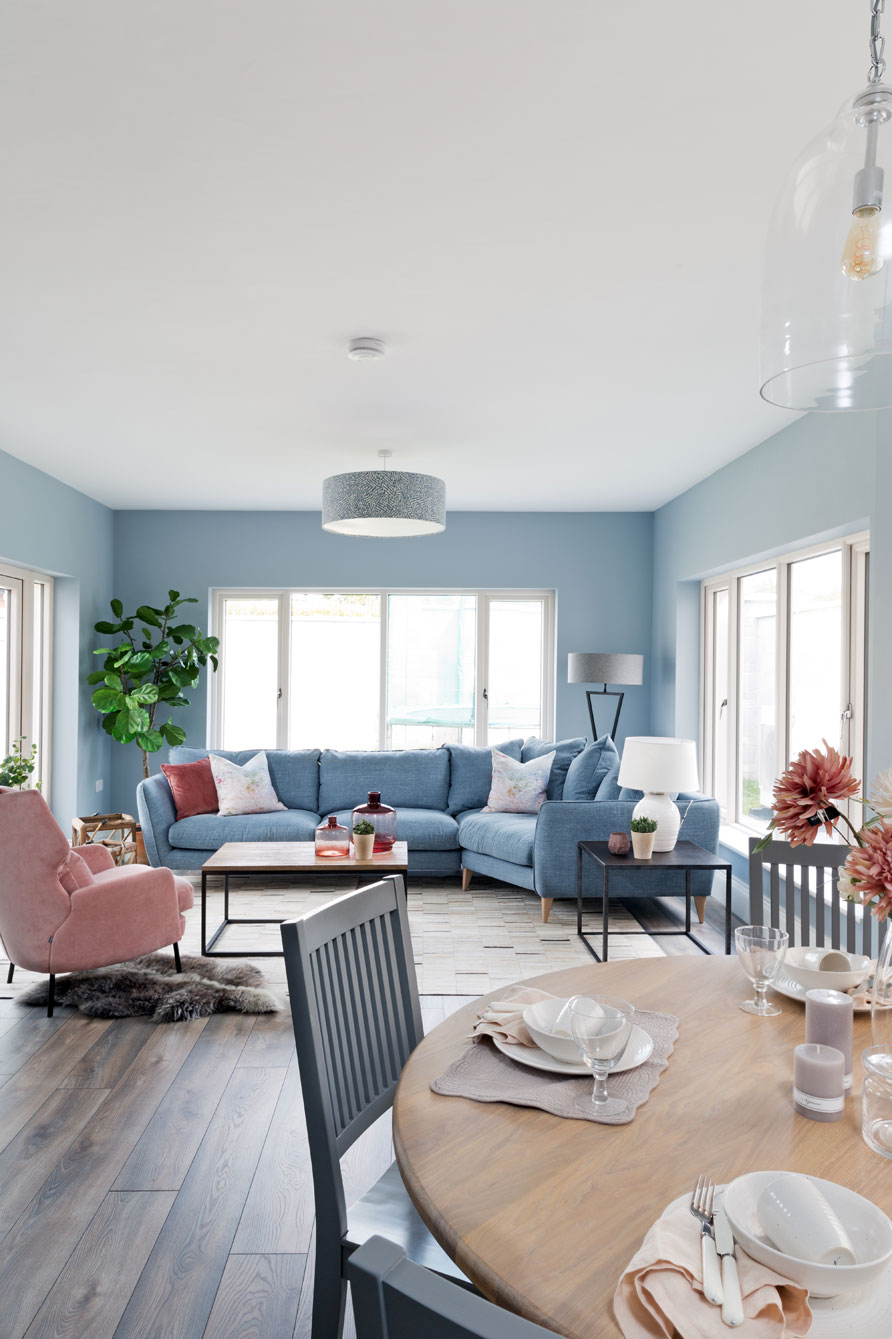 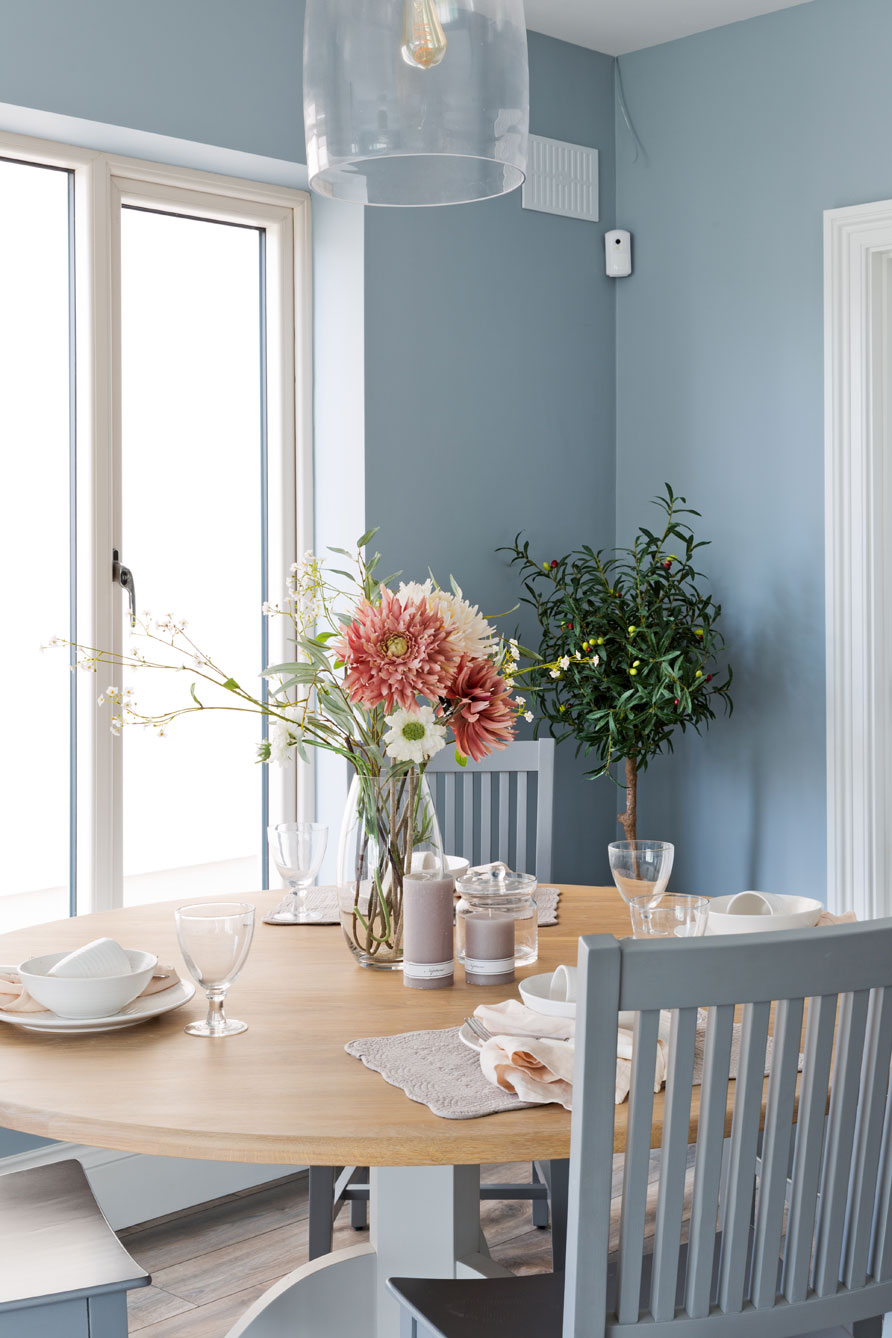 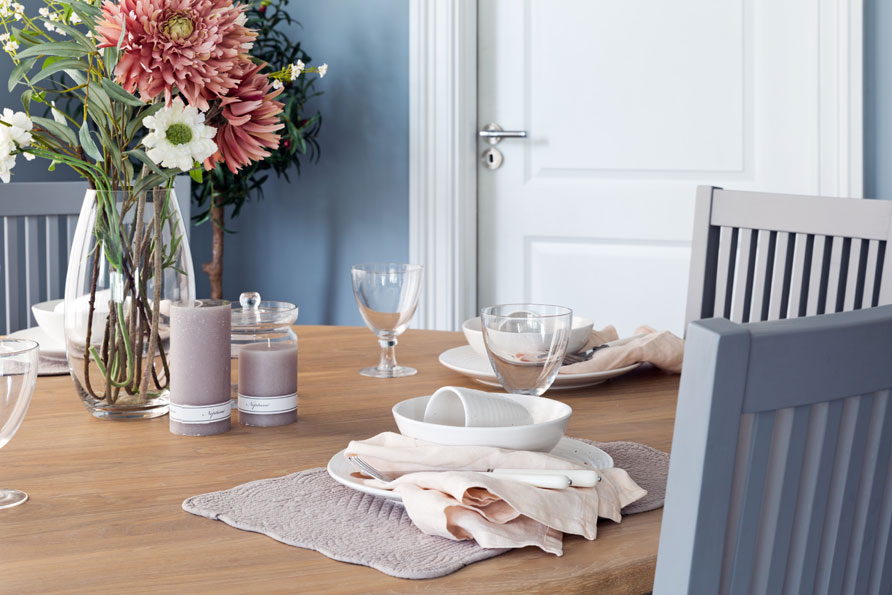 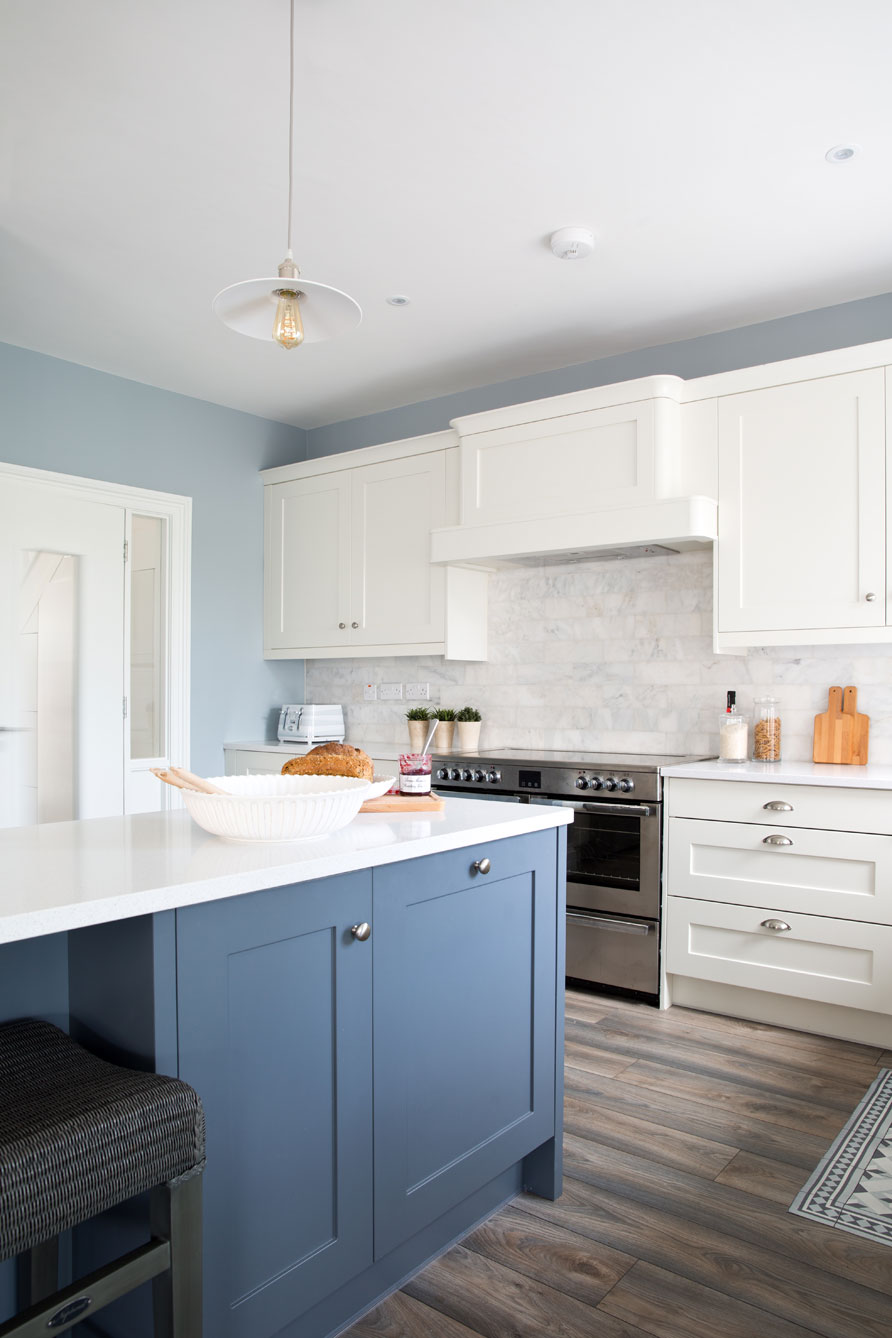 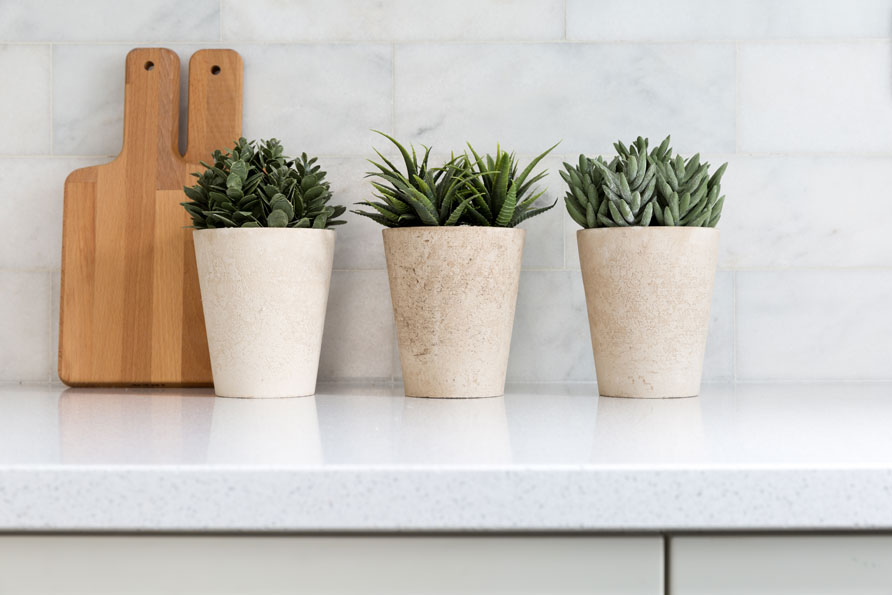 Client: Bridget and Dermot O’Hanlon and their four children

The Brief: Geri was tasked with designing the open plan living, kitchen and dining space during the build stage. The O’Hanlon’s were looking for a functional, family friendly space that was bright and welcoming.

Geri knew from the O’Hanlon’s first consultation that the colour palette was going to be soft and bright, to encourage as much light in the space as possible. She began with a soft powder blue on the walls and a large blue linen SITS L-shaped sofa as the anchor piece in the room – nothing less for a family of six!  The blue colour scheme was complemented with a pink accent colour in the Neptune Alex velvet wing chair. A touch of industrial is introduced with the black iron framed side tables and floor lamp, and the leather patchwork rug softens the weathered oak laminate floors.
As the clients chose not to have any window dressing, Geri had to find other ways to soften the space, using textured rugs, plenty of faux flowers and plants,  and a handmade bespoke diffuser pendant shade, using Romo designer fabric.

Working with a new build, Geri had to consider what builder-grade fixtures and finishes already existed in the house.  It is important to sympathise any further design plans to these existing elements. But in this case Geri got involved early enough to assist the O’Hanlons in picking the right fixtures to complement their desired interior.

Geri chose a weathered oak effect laminate to run throughout the open plan space, and a simple kitchen from the builders stock, painting it in Neptune’s bright Silver Birch and adding a touch of functional luxury with a Silestone countertop. To offer some focal interest in the kitchen, the island is painted in Little Greene’s Hicks Blue and the backsplash is a marble effect metro tile. The Neptune pendant lights were kept high and simple so as not to clutter the eye line and the Slate backless bar stools, also by Neptune, complement the touch of industrial aesthetic that runs throughout the space.

The dining area straddles these two spaces, and is anchored by a country-chic pedestal table by Neptune with matching Harrogate chairs painted in Fog. A simple glass cloche pendant light by Browsers hangs overhead.

Once a blank canvas, Geri has succeeded in creating a space with three clear functions, as well as giving this family a beautiful home to enjoy for years to come.