A STUDY IN BLUE IN CO. CLARE

Brief: To turn a drab interior into something playful but with longevity and a touch of luxury.

Creative Director Geri O’Toole Glynn was approached by Sara Jane after the purchase of her new home in Co. Clare. Sara Jane was still living in Co. Dublin, and wanted her house ready to move into when the time came to relocate. Structurally the house was sound, with much of the fixtures and fittings in good shape, but the house lacked character. Sarah Jane needed someone to take on the task of redecorating and turned to Geri for help 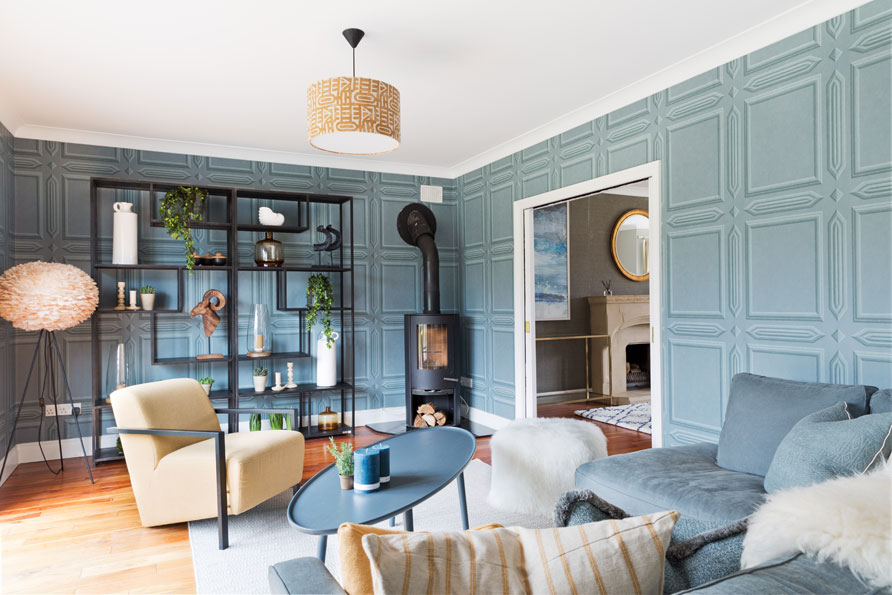 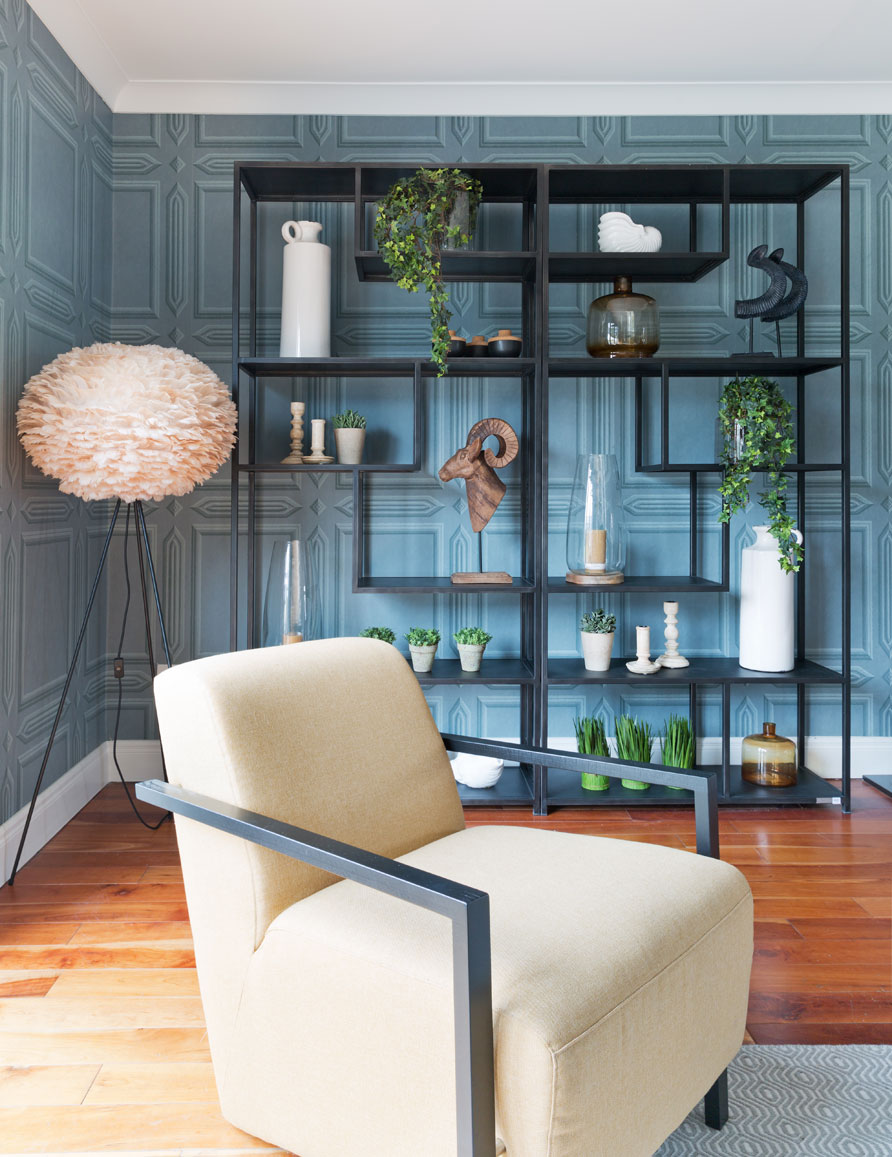 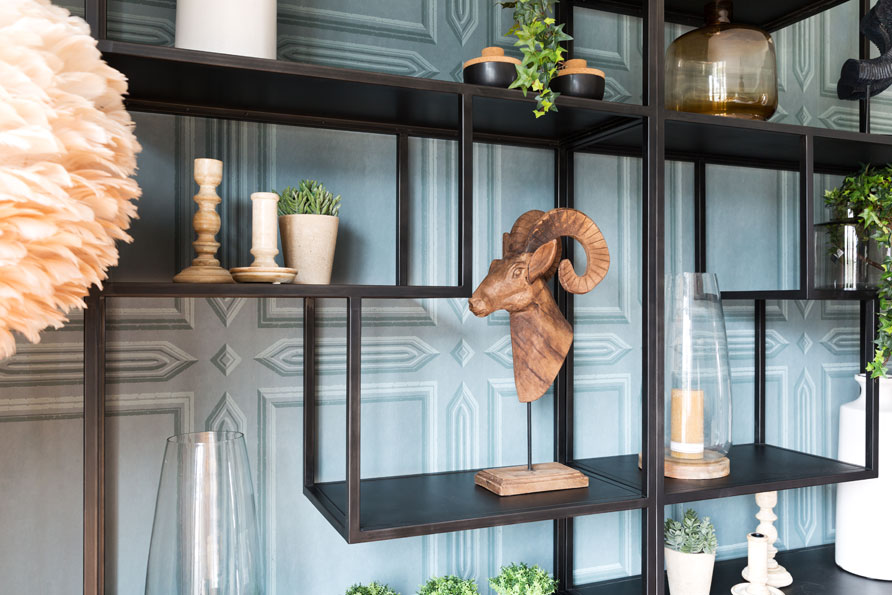 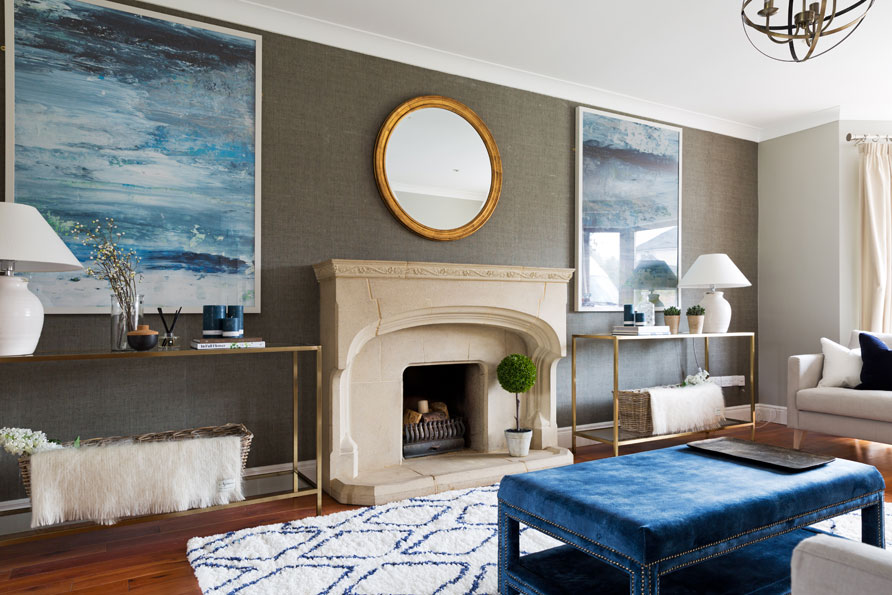 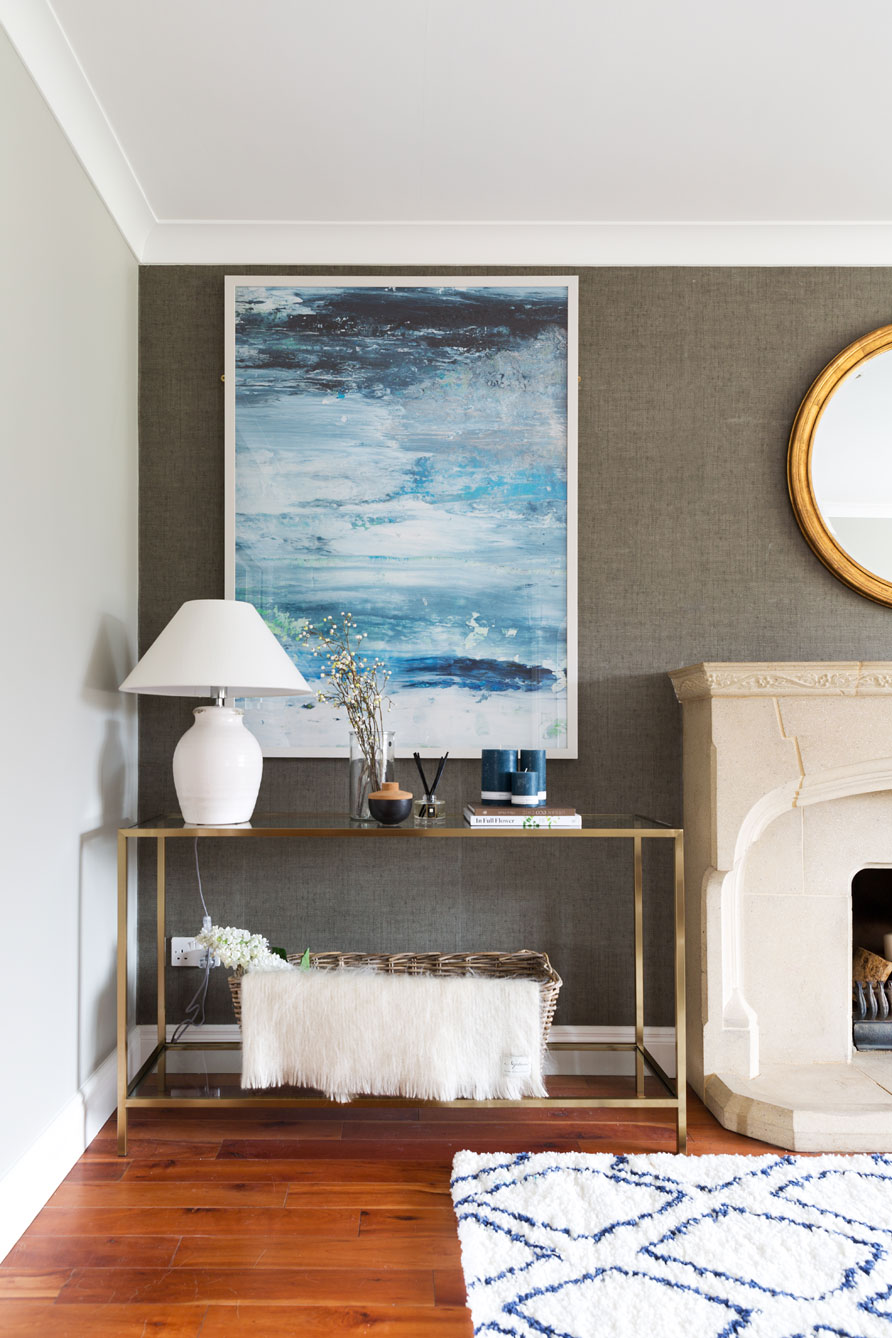 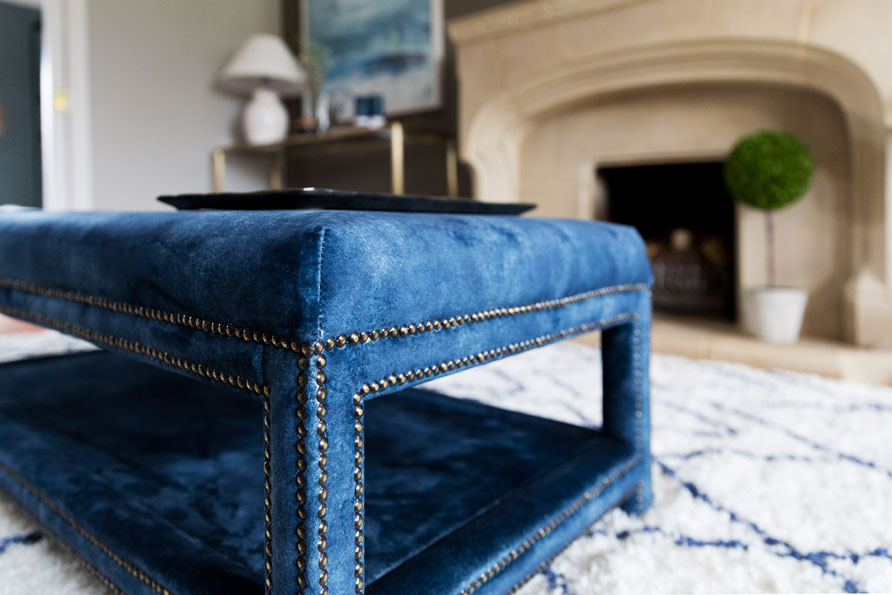 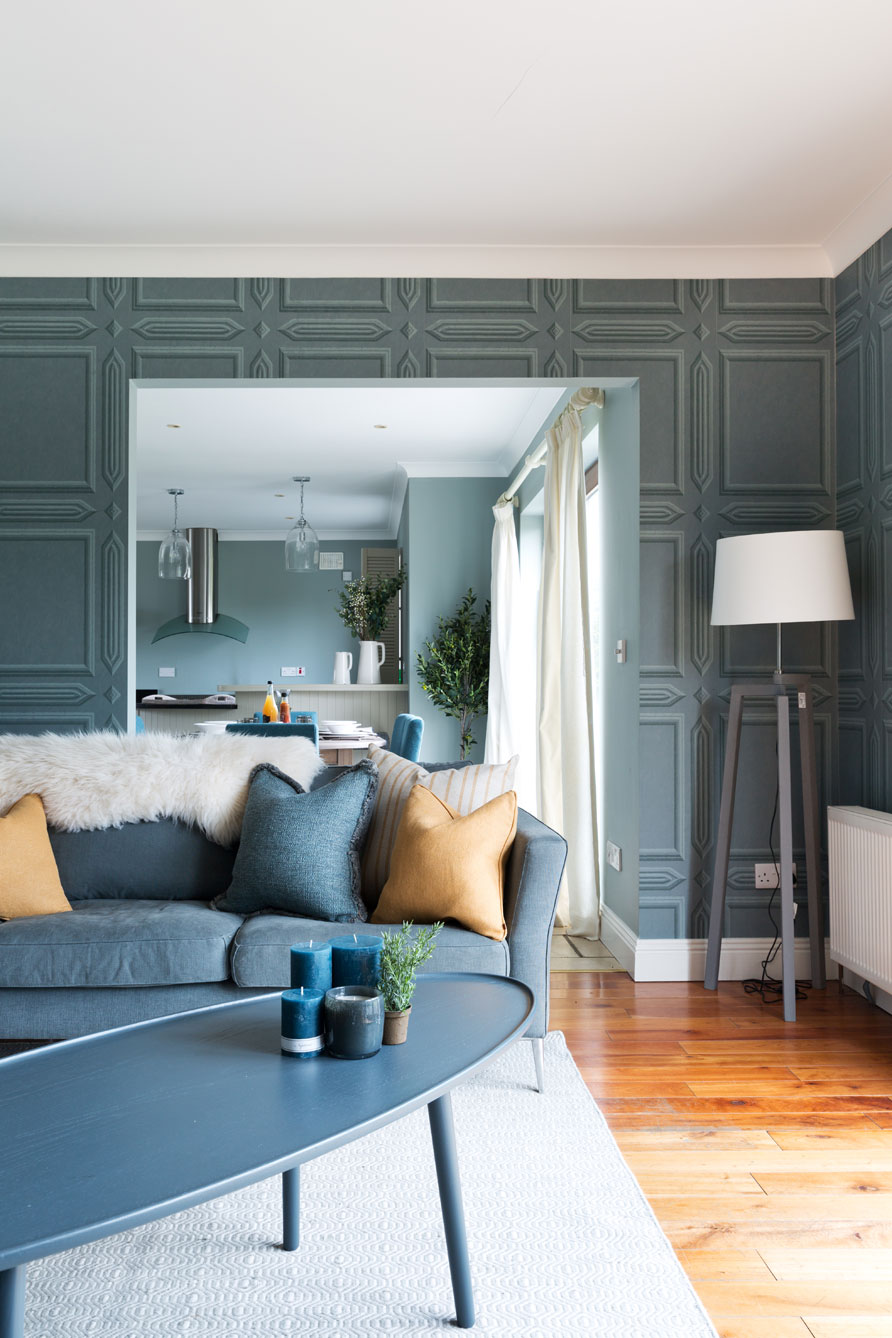 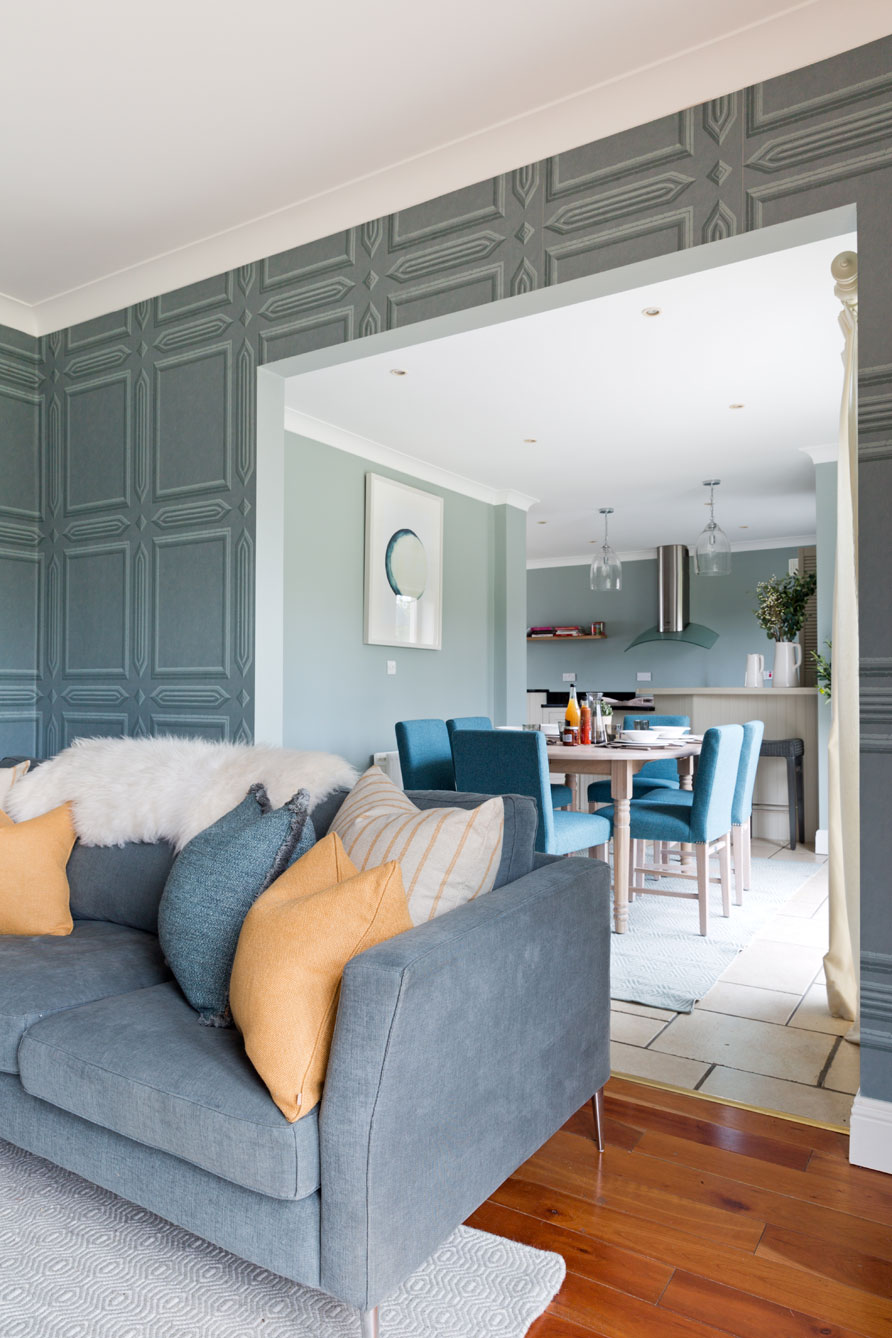 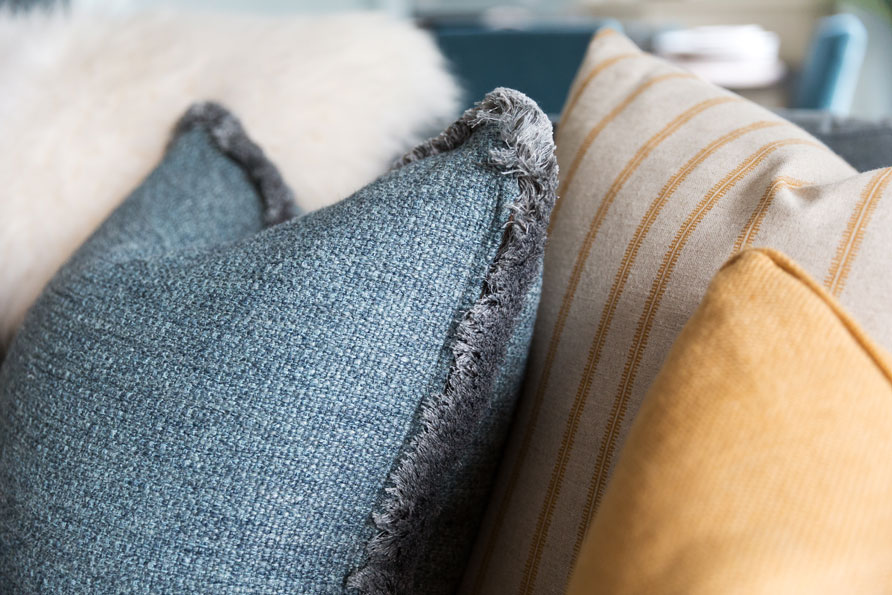 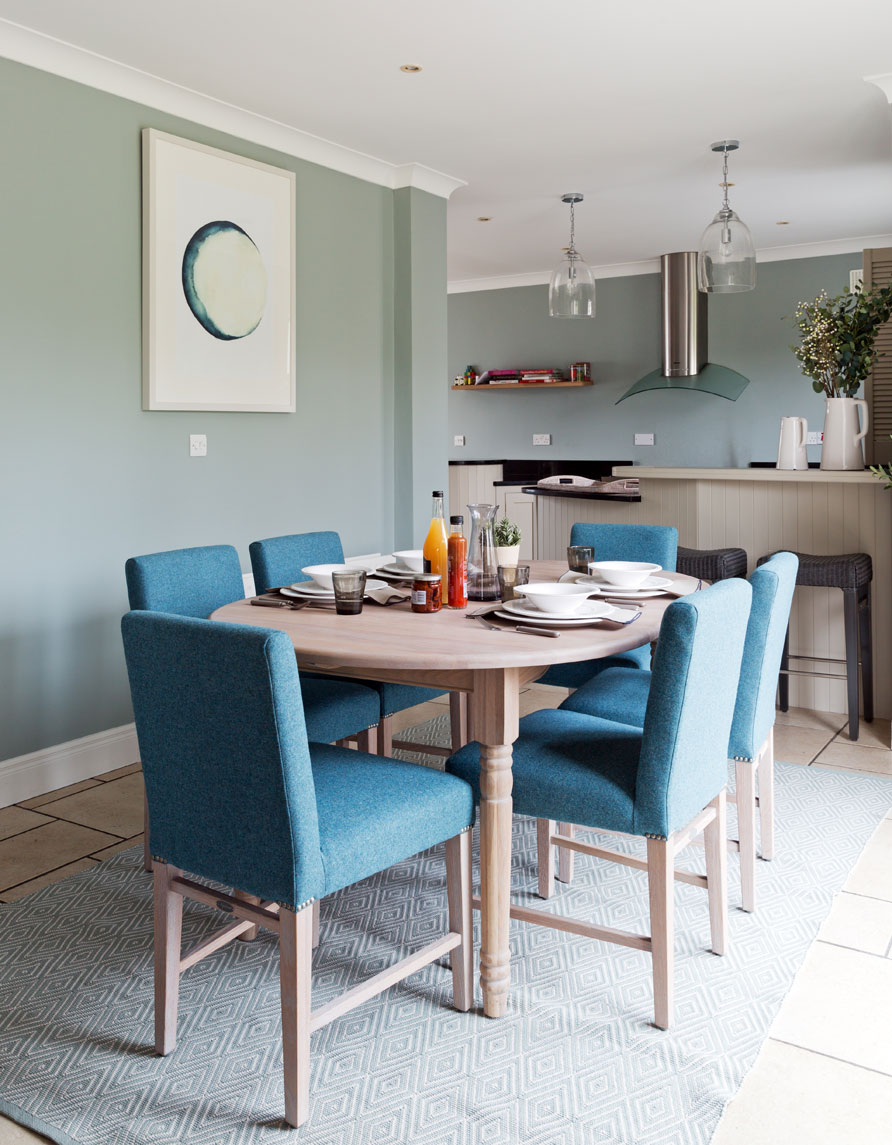 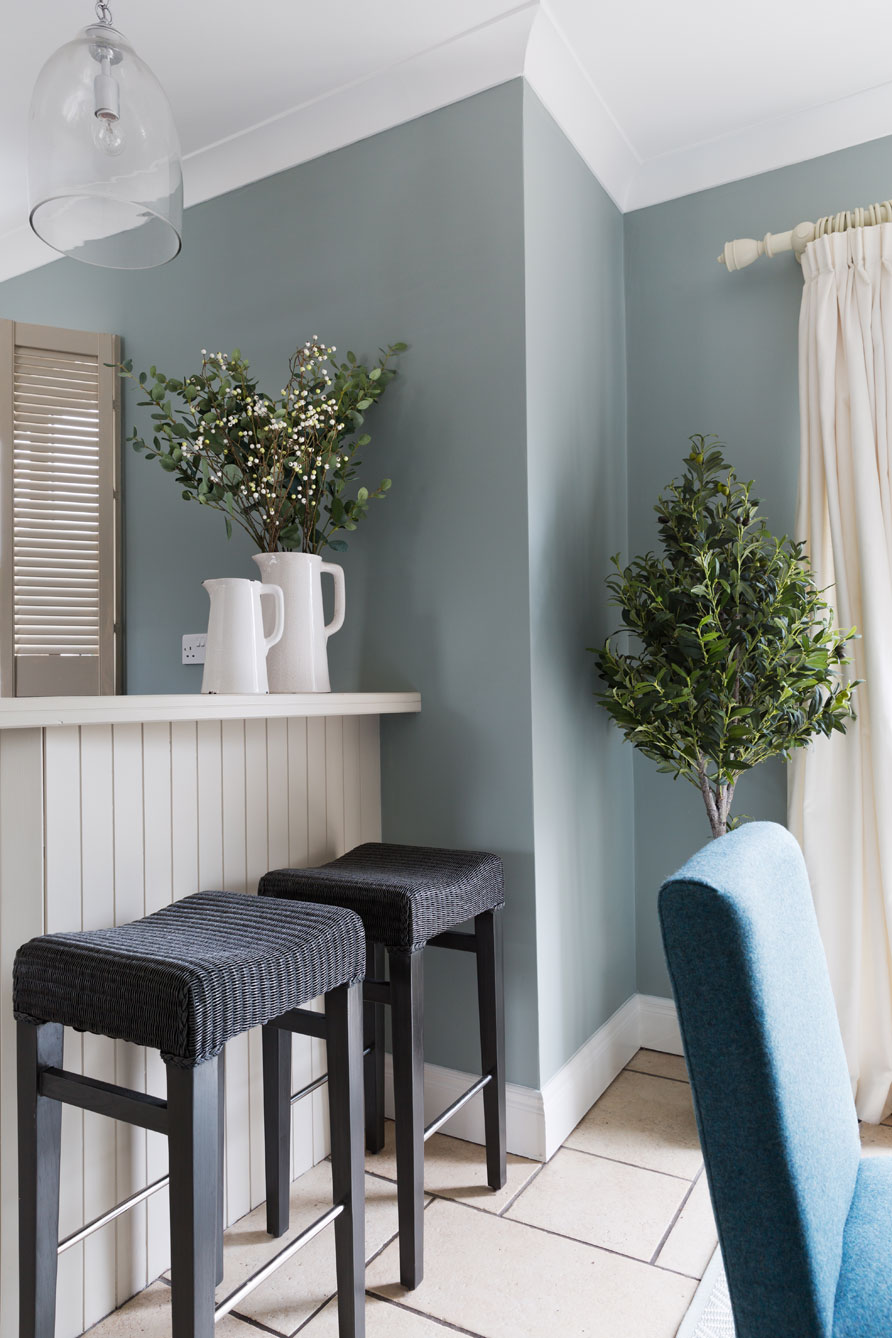 “Sara Jane and Michael wanted a bit of fun in every room,” says Geri. “What designer doesn’t want to hear that?! I was excited at the prospect as there are so many fun, yet sophisticated products available that I felt we could create something really quite unique here.”

Sara Jane and Michael remained in Co Dublin throughout the project, with Geri making just one initial site visit. This did not present any problems for Geri though.

“We conducted the entire project remotely,” she says. “I communicated with Sara Jane and Michael regularly with mood boards, product images, swatches and updates, without any problems.”

While the some of the house’s original features were in good condition, a little spruce up was required. Firstly all the wood work was painted in Little Greene’s Slaked Lime, and the yellowing varnished pine kitchen was transformed with a few coats of Stone by Paint Library, to complement the pre-existing tiled floor.

“There really was very little to do in the kitchen, as painting the cabinets and breakfast bar had such a transformative effect on the space. Although I did add a custom-made floating shelf to the wall to display Sara Jane’s cookbooks, as well as a few Neptune Lloyd Loom style stools at the breakfast bar, to create a bit more functionality to the space,“ says Geri.

The open plan dining room adjoining the kitchen was in need of a dining table, and although there are only two permanent members of the household, plenty of additional dining space for guests was required. Geri’s solution: the beautiful Sheldrake extendable dining table by Neptune paired with Neptune’s Shoreditch dining chairs upholstered in Angus Teal wool.

Following through the dining room from the kitchen you arrive at the sitting room, a multi-functional space: for watching movies, reading or relaxing to name but a few. To create the feeling of warmth in the space, Geri opted for a darker shade on the walls while also injecting a little whimsy with the trompe l’oeil panelled wallpaper from Little Greene. This proved to be the perfect backdrop for the more streamlined, minimal furniture chosen for the space, namely the Swedish designed SITS sofa in a cosy grey linen and the striking minimalist armchair.

The armchair and solid wood coffee table were both sourced during a buying trip to France – as both buyer for Browsers and its lead interior designer, Geri has the ability to source unique, customised furniture from around the globe. In this case the table was painted black on request, inspired by the pre-existing stove.

The throw cushions were hand made in Ireland using a selection of luxury fabrics and trims by designer Mark Alexander and down filled fillers. Some lighter, softer tones were added with the feather lamp shade, faux fur footstool, locally sourced sheepskin and a subtly patterned rug.

The ceiling light, another custom piece, was hand made in Ireland using a Mark Alexander fabric and a base diffuser to ensure a softer light in the evenings.

Finally, a statement free standing shelf unit was added, again reinforcing the clean black lines found throughout, and adorned with a selection of handpicked accessories from the Browsers Collection.

Last but not least to get an update was the living room, a touch more formal than the other spaces, but equally striking.

“There were two things that directed the design of this interior,” says Geri. “Firstly the very large rustic sandstone fireplace; secondly the large size of the space itself. I had to choose pieces that would not overpower but fill the space visually. To do this I stuck with items that were large in scale but quiet in their presence: light tones, minimal patterns, no fuss.”

First, Geri selected the backdrop for the space, a wallpaper from the Grasscloth collection by Thibaut, a range of wallpapers integrating natural fibres to create a subtle textured finish. Then two three-seater SITS sofas were chosen, the Impulse design upholstered in a neutral linen. Next, two brushed brass Keswick console tables by Neptune were placed on either side of the chimney breast, the glazed tops contributing to the less-is-more mantra of this particular interior. A deep pile Calvin Klien rug was selected, featuring a large scale geometric pattern, the only concession to this minimalist space.

To finish the space and give it an extra level of personalisation, Geri designed a luxurious ottoman in a rich navy velvet, trimmed with brass studding. The large scale prints were made exclusively from a series of originals Geri found and framed locally, an inexpensive way to guarantee a uniquely finished space, without the cost of buying original art.

“This project was a great excuse for me to exercise my local and international contacts,” Geri says. “Some of the custom and bespoke pieces used in Sara Jane and Michael’s home lend the interior that extra bit of uniqueness. And not only is this home full of fun as requested, I had great fun designing it!”