House: A new build detached home in the Limerick suburbs

Brief:  Fiona and Martin wanted a finished home ready to move into, full of light and a refined elegance. Being busy professionals, they were both open to any scheme as long as it created a crisp, contemporary and comfortable finish that they could live in into retirement.

Working with a client during build stage can be an exciting project for any interior designer, but Browsers Creative Director Geri O’Toole Glynn especially loves the challenge of creating a space from scratch. 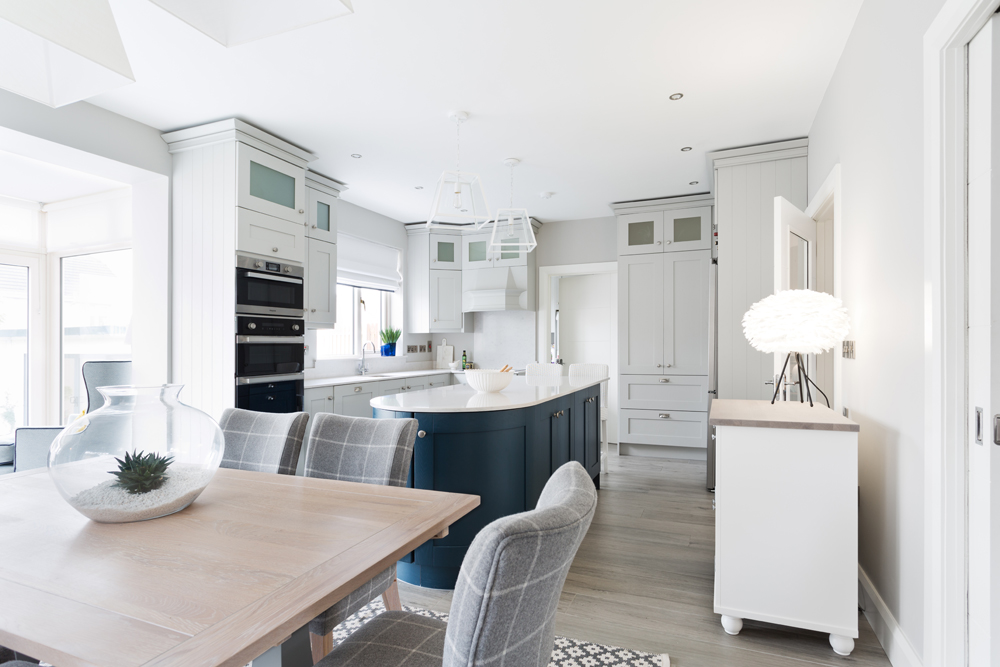 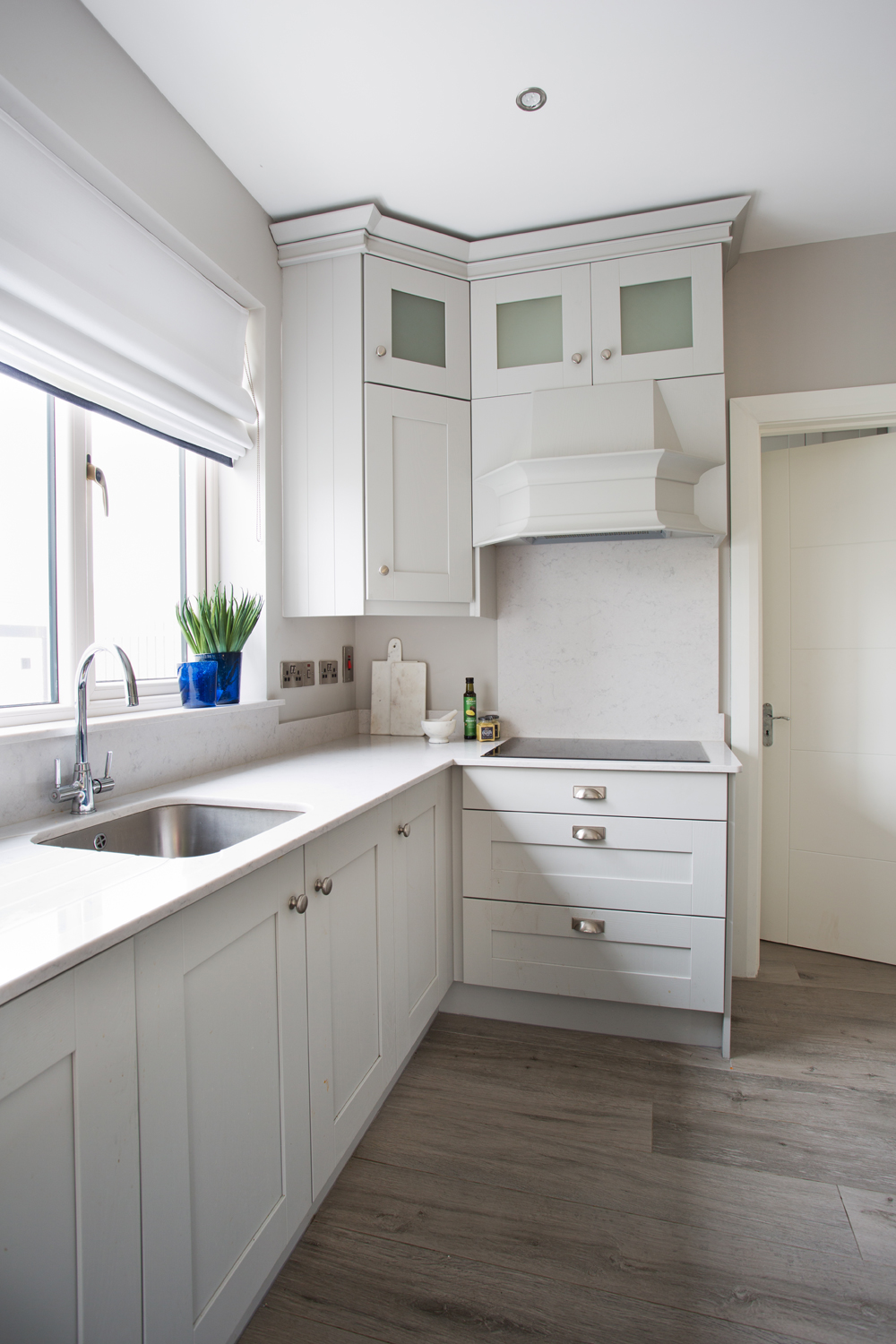 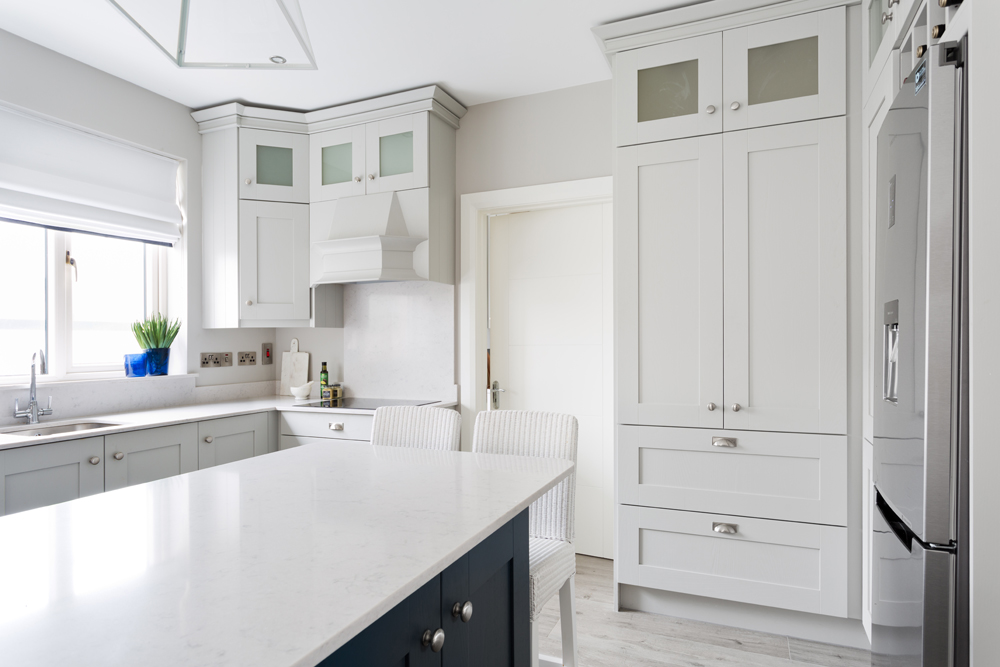 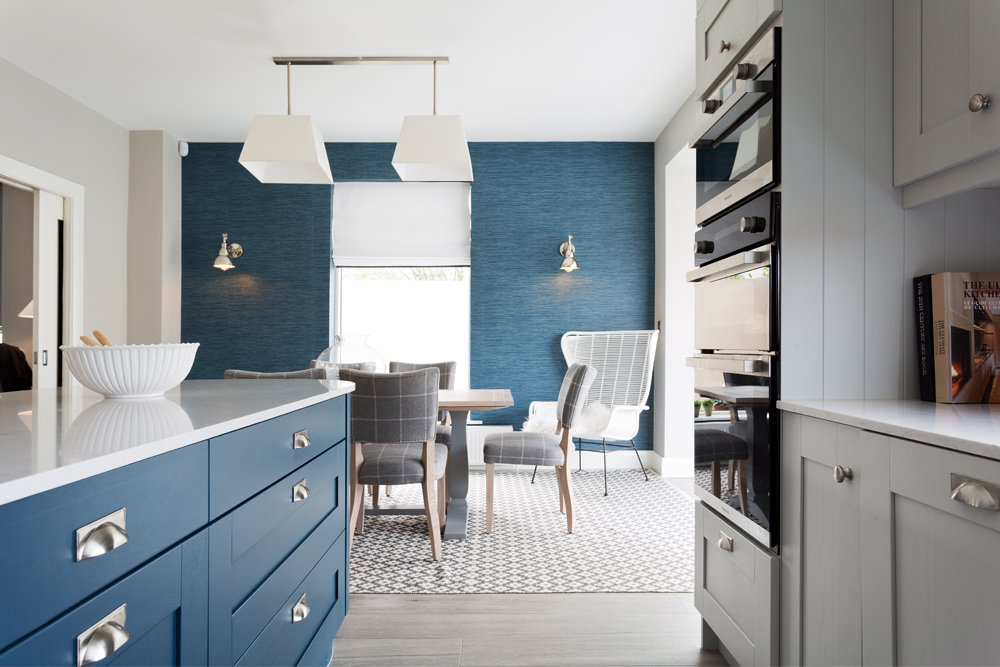 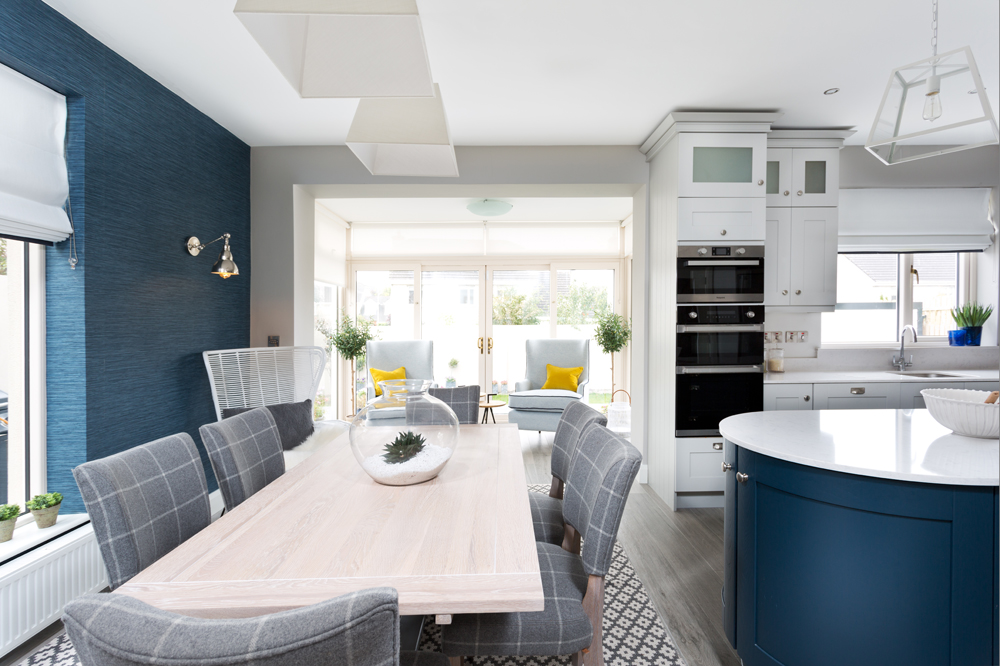 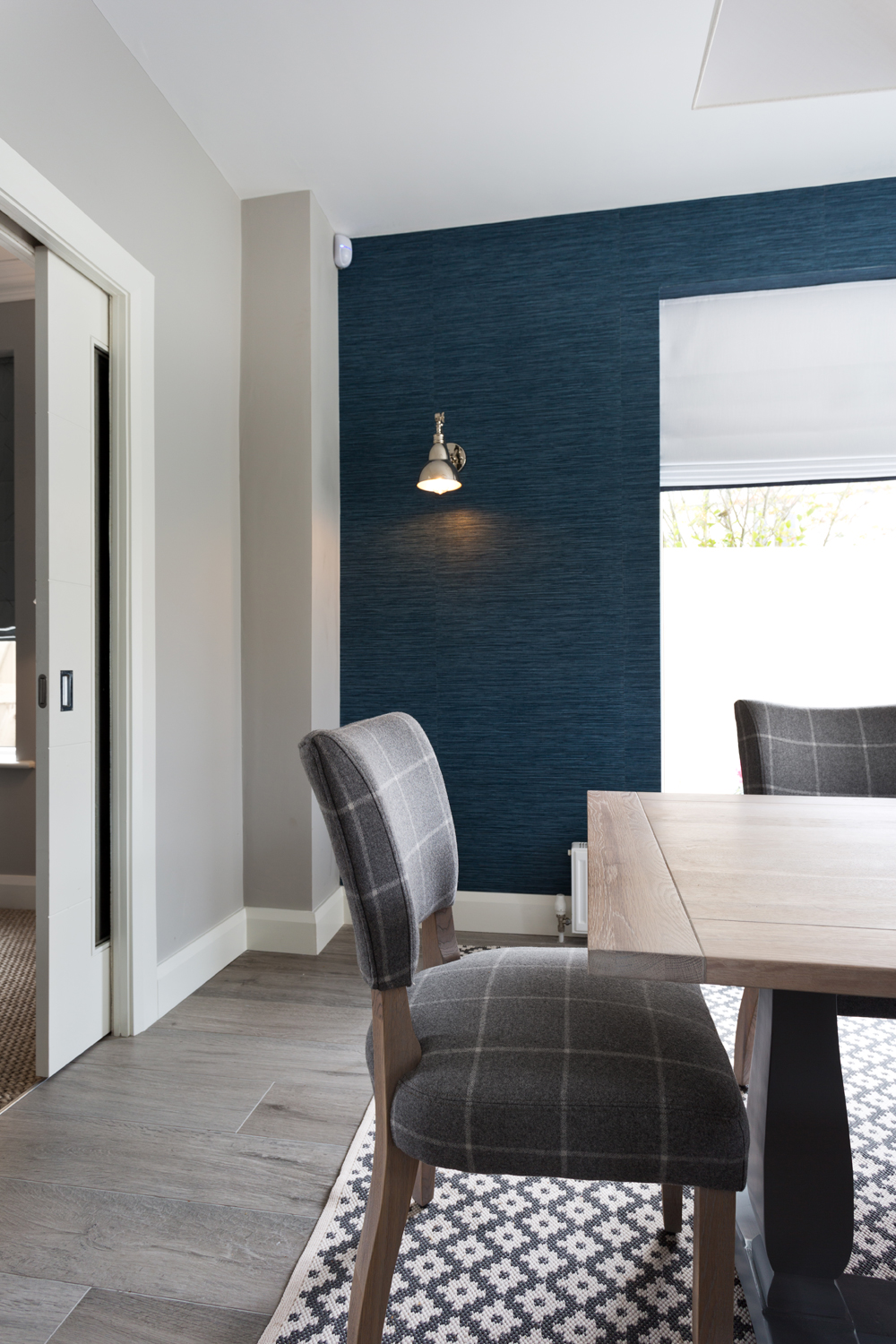 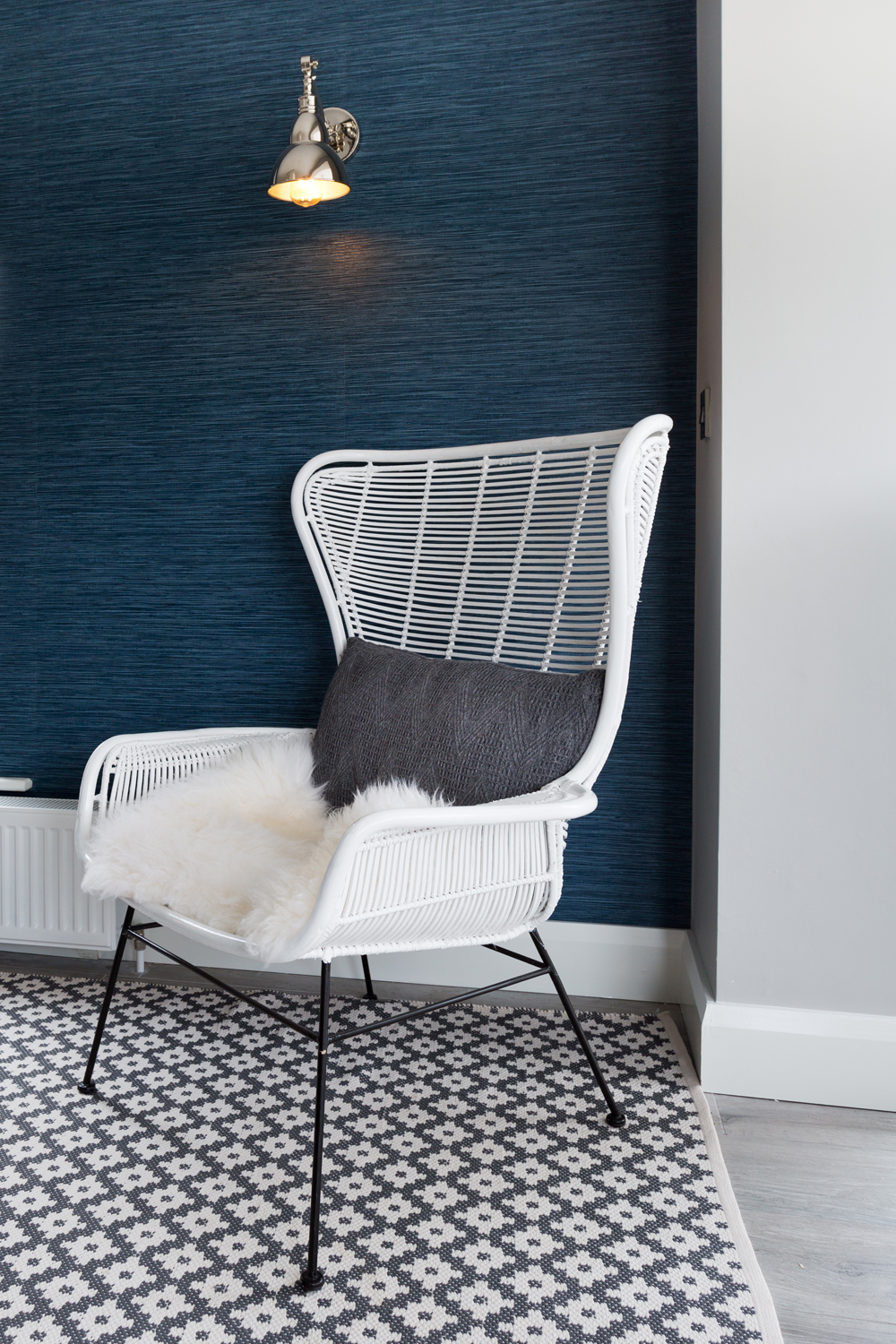 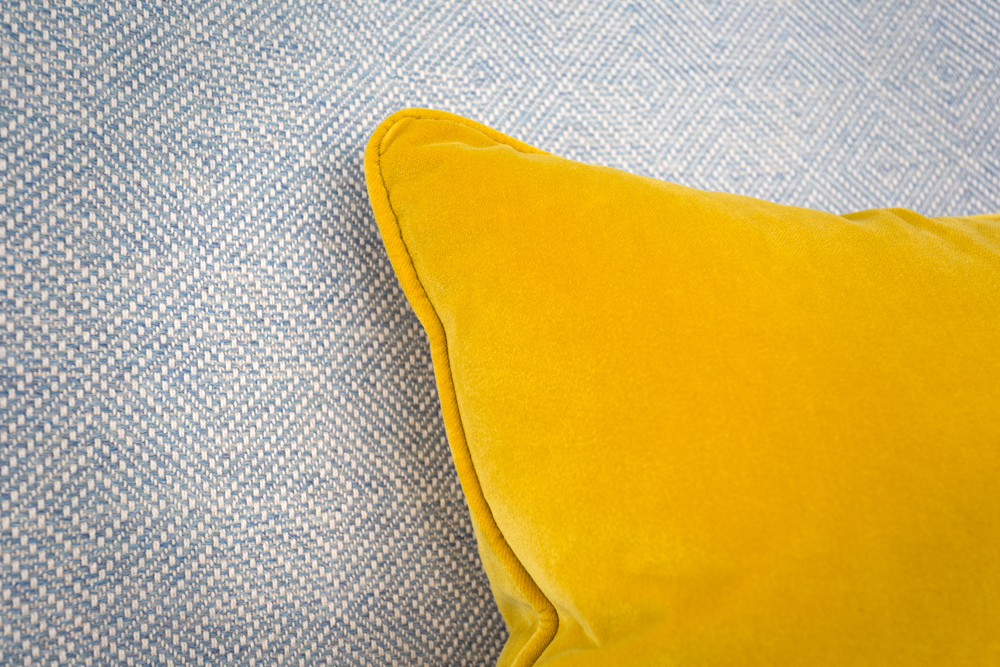 Fiona and Martin were fairly relaxed about what kind of scheme they wanted for their home, which can be tricky in terms of finding a starting point,” says Geri. “So for this project I began by choosing the kitchen colour from a limited palette, the deep blue creating a stylish focal point and a gorgeous mood for the rest of the house.”

Geri then focussed on the finishes throughout the living space. She started from the floor up, choosing a striking tile from Ca’Pietra that cleverly replicates timber as it is available in extra long and extra wide sizes. The tile was used throughout the open plan kitchen/dining/sunroom areas to give a feeling of space and flow.  The dining feature wall was papered in Thibaut Grasscloth in Navy, adding a subtle texture and warmth to the space, while the remaining walls were painted in Little Greene’s French Grey.

Geri then started sourcing furniture and accessories, layering up colours, textures and finishes to create a vibrant space. For every hard surface, Geri chose soft upholstery and accessories to limit the hard edges in the space.

She says, “Although the clients wanted a crisp space, this did not eliminate the possibility of lots of soft, textured finishes and curvy lines. Once I kept the tones subtle and the patterns small, it all tied in together.”

In the kitchen, the Neptune dining table is complemented by custom made Neptune dining chairs upholstered in Ewan wool in Dove with chalked oak legs. The modern geometric rug is completely washable, a design from popular American brand Dash & Albert.

The twin armchairs in the sunroom are Bespoke by Browsers, designed in house and made in Ireland using a solid wood frame and foam, fibre and feather filling for maximum comfort and longevity. They were upholstered in Linwood wool with a contrast velvet piping. The wicker occasional chair was picked up during a Parisian buying trip – Geri knew it would be perfect for this scheme.

The lighting was plentiful in this space, so had to be minimal so as not to compete visually. Geri chose a selection from Neptune in subtle tones of nickel and white; on the dining room wall is the large Brompton light; the dining table is light from above by the Hughes double pendant with linen shades; and the kitchen island features two of the small Browning pendant

The scheme continues into the living room, which complements the dining/kitchen, but, fittingly, adds it’s own level of luxury and comfort.