A SMALL BATHROOM WITH BIG PERSONALITY

Brief: To design a bathroom interior that is both contemporary and fun, but also sympathetic to the available space.

Cliona approached Creative Director Geri O’Toole Glynn to initially work on other rooms in her house, but the project was delayed due to structural changes required throughout. The bathroom was the one room that was ready for a makeover – the suite was drab, dated and lacked storage – so Geri and Cliona began their collaboration here. 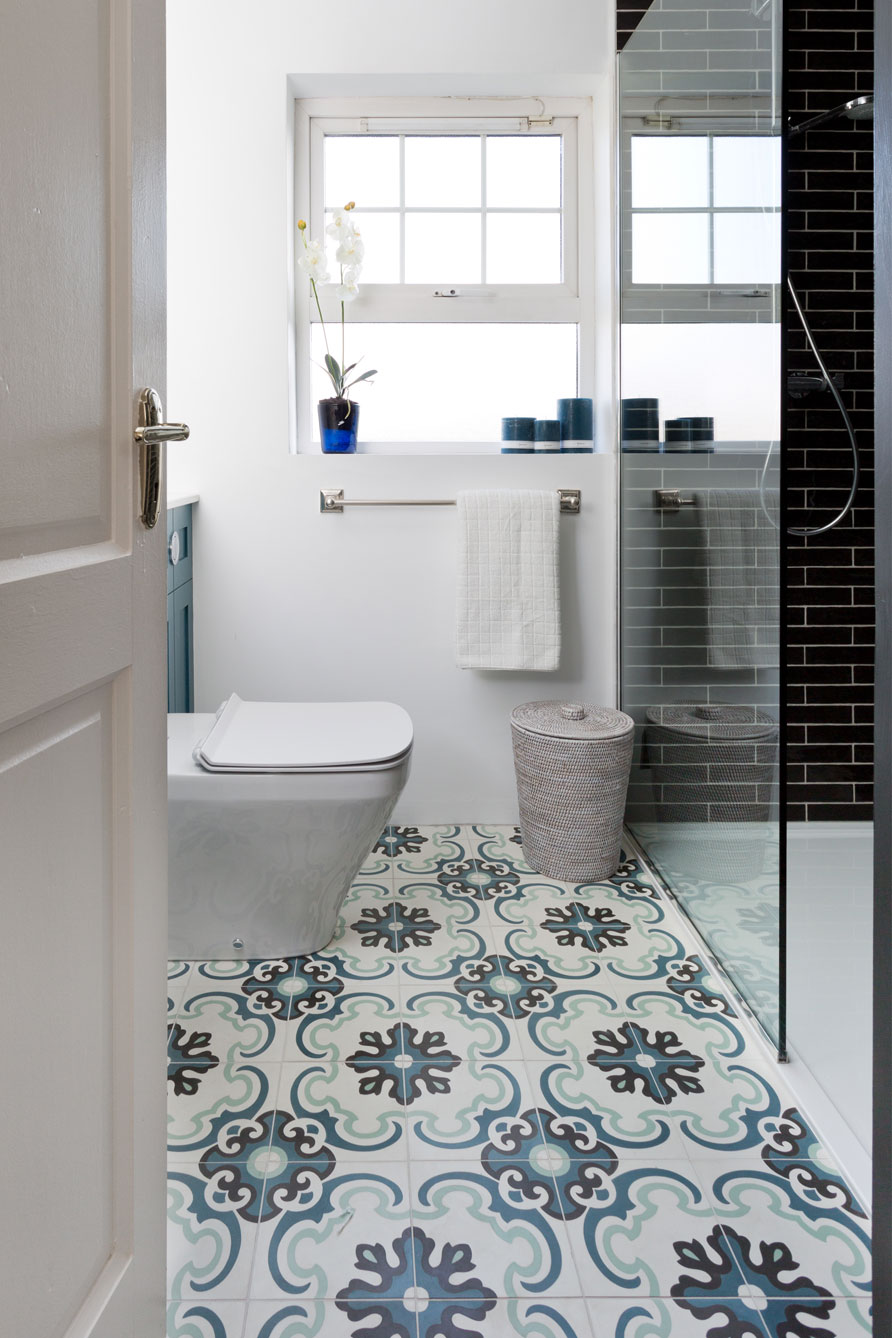 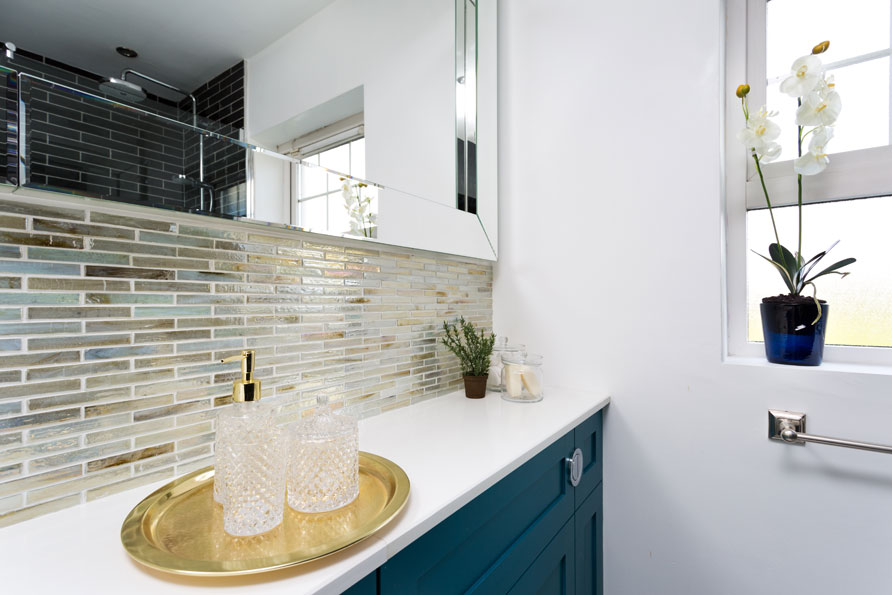 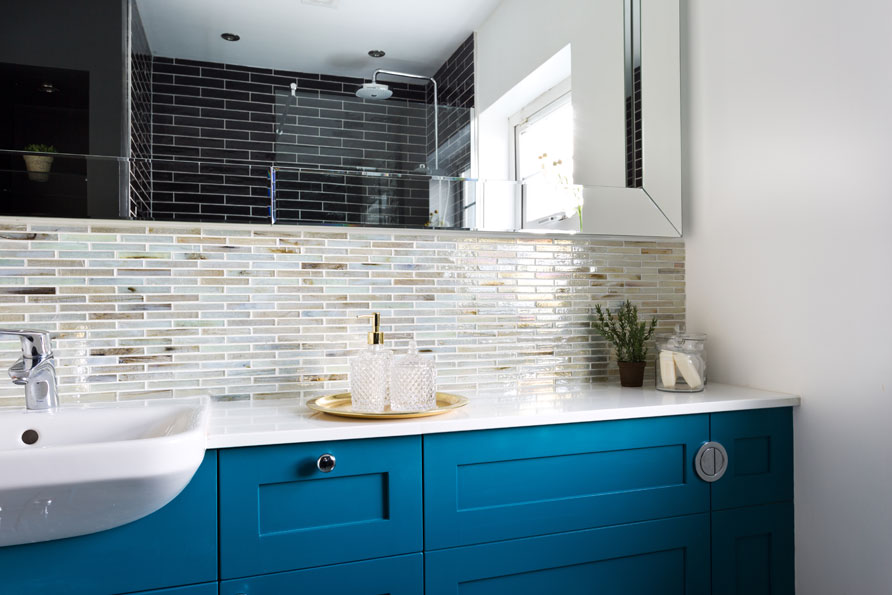 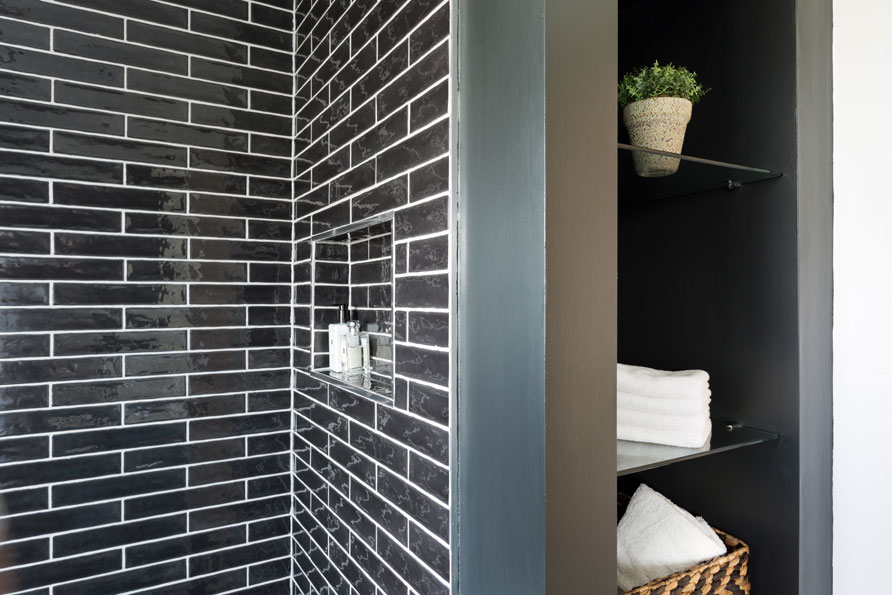 “Cliona felt strongly about the design of her bathroom”, says Geri. “It’s the first room she uses in the morning, so wanted something that would a smile on her face and set her up for the day ahead. It was important that we created lots of visual interest in this design, which can be a challenge in small space. But it was a challenge we were certainly excited for!”

Geri began with the floor. Being the largest surface area in the room, Geri knew that if she was going to get away with a pattern in this small space, it would be here. She chose the large repeat pattern encaustic tile Toulon from Ca’ Pietra, a fun design that might belie its serious manufacturing process: encaustic tiles are inlaid with colour, rather than being printed on top, ensuring sturdy floors that age beautifully. Plus, by choosing this larger sized pattern, Geri avoids creating too much fuss in an already small space.

As Cliona felt the lack of surface space most acutely, Geri decided that only a bespoke unit would do. Drafting in the help of the Browsers carpenter, they designed a unit that ran flush with the length of the wall, choosing an under mounted sink to optimise surface space. The stain resistant countertop is Zeus Blanco Matte by Silestone, and the iridescent mosaic splash back is also Ca’ Pietra.  The cabinets are painted in the vibrant Marine Blue by Little Greene Paints, and a large bevelled mirror covers the wall above the unit, a most effective way to create an illusion of space.

Geri continued to optimise space in her design by removing the bathtub (which suited Cliona’s busy lifestyle) and utilising a small cavity wall behind the door. Again working with the carpenter, the wall was rebuilt to include lit inbuilt open shelving, painted a dark graphite. This colour scheme continues into the open shower, where contemporary metro tiles line the walls from floor to ceiling. Geri chose a simple glass partition to further maximise the illusion of space.

The finished design is a light filled and dynamic room, with no compromise – a wholly different space to its ‘90s era predecessor.